Building bridges. Creating synergies. Driving convergence. From North-East Romania to EU and beyond.

The Brussels Office of ADR Nord-Est represents the North-East Region of Romania in the EU. We work with counties, municipalities, universities, businesses, learning facilities, and other organizations.

The Brussels Office was founded in 2010 and aimed to ensure North-East Romania a strong voice in the EU and to endorse that our region is a proactive player that benefits from all the opportunities and that promotes itself as a European region open to the world.

We dream of a prosperous region that has a resonance in Europe and beyond.

We lead the way and support our regional partners to create international opportunity, growth and impact.

Our team is very vibrant and diverse in background and expertise. 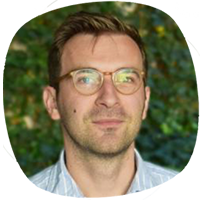 2020 was for me 2666 by Roberto Bolaño, No by Pablo Larraín, first glacier walk (Mt. Tronador). In Brussels, a board member of ERRIN and a vice-president of EURADA. I stand for a diverse & citizen led EU, a place where cities and regions can flourish. I always stand up for the underdog and I usually play offense.  Fluent in English, some knowledge of Spanish and French, a starter in Dutch and Bokmål. 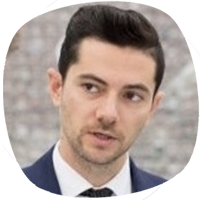 //  Background in FDI, EU Policies, community building, financial analysis, sales and project management. Enthusiastic about people and their values, about networks and communities. Mix between sociology and economics degree, translated into FDI and EU related activities. My role in Brussels empowers me to represent both the region and the organization towards EU Institutions, European Networks, international trade fairs and conferences (sometimes as a speaker) and other regions and companies. Active ERRIN member – ICT working group co-leader. I organized and handled several official delegations during foreign trades, conferences or forums.

//  I live for nature, sports, adventure and thrills. Fluent in English, some knowledge in French. 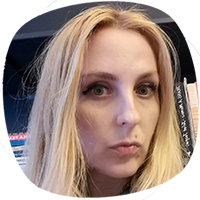 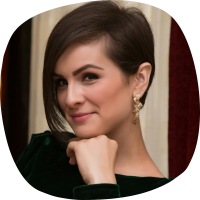 //  I am a motivated professional with experience in project writing and evaluation of funding documents, and a proven track record in successfully managing European Commission-funded research, mobility and other projects in international and multicultural environments with partners across the globe Europe and beyond. I also have knowledge in the exploitation of research results, innovation and technology transfer and have an academic and practical interest in the design and implementation of programs and calls aimed at regional development and convergence.
Close 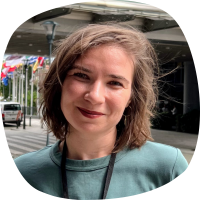 //  In 2017, I graduated from the Faculty of Law of the „Alexandru Ioan Cuza” University in Iasi, continuing with a Master’s in Public International Law at the University of Bucharest. Because I wanted to contribute to the change for the better in Romanian society, in 2018 I joined civil society where I worked with various communities in Romania for 4 years. In 2022, I arrived in Brussels with an internship at the European Parliament, and now I have the chance to get directly involved in the development of communities in the North-East region thanks to my work in the North-East RDA.
I like literature, travel, gastronomy and conversations with people interested in making their contribution to the development of society.
Close 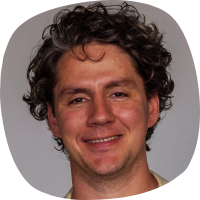 // I graduated from the University of Bucharest, master in non-formal education and have experience in non-profit organizations as a project manager and corporate fundraising. In 2020 I was a trainee at the European Commission, and since then I have remained anchored to the professional activity in Brussels. I am a person passionate about sports, politics, traveling and gastronomy.
Close 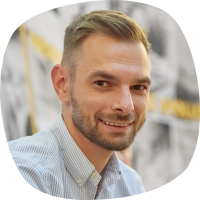 // I am a young professional willing to get involved in creating a better place in the North-East region of Romania. I consider myself a follower of the Lifelong Learning concept and believe in a society based on healthy values. I graduated from the Academy of Economic Studies with a master’s degree in European Economy.
I have had work experiences in public administration, private and non-governmental sector. All this helped me to develop organizational, planning skills and to be a responsible and reliable team player.
Close

Find out what it has in store for you

// The North East (Nord-Est) is a development region in Romania that comprises the following counties: Botosani, Iasi, Vaslui, Bacau, Neamț and Suceava.  The area of our region is 36,850 km2, slightly bigger than Belgium, and the population is roughly 3.3 million, more populous than Lithuania.

// In the past 10 years, in our region, the GDP per capita, the quality of infrastructure and the economic complexity have all increased consistently, following the national trend.

// In 2019, Romania made it to the high-income group of countries, from a formerly upper-middle income, according to the World Bank.

// According to the ATLAS of Economic Complexity, powered by Harvard’s Growth Lab, Romania ranks as the 25th most complex economy in the World, improving 5 positions in the ECI ranking in between 2008 – 2018. 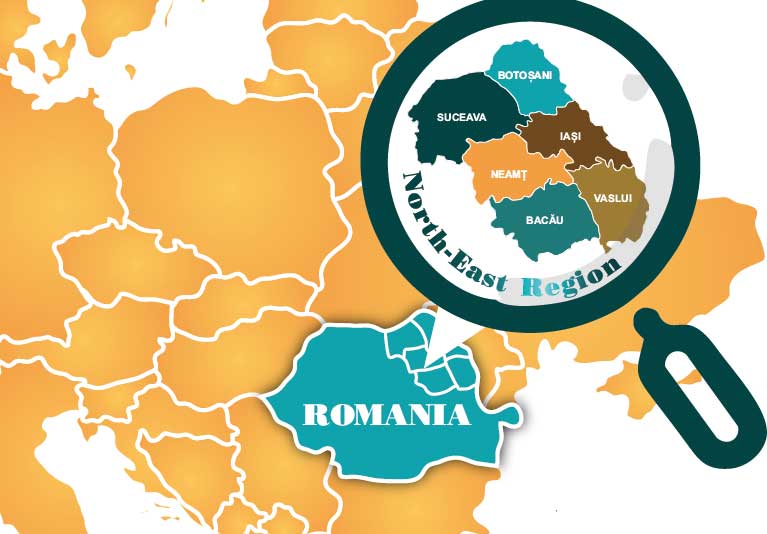 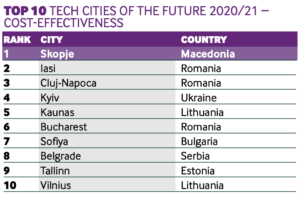 We believe in people and in their capacity to grow, to excel and to overcome hardship.

Together with hundreds of organizations and thousands of individuals we’ve been able to master:

We take pride in and we are grateful for our major wins:

Founded in 1992, the European Association of Development Agencies (EURADA) gathers people working on economic development through a large network of 66 members throughout 21 countries in the European Union and beyond.

The European Week of Regions and Cities is an annual four-day event during which cities and regions showcase their capacity to create growth and jobs, implement European Union cohesion policy, and prove the importance of the local and regional level for good European governance.

The Brussels Office was involved continuously in EWRC, organising many panels and events in the past years.

TAIEX-REGIO PEER 2 PEER facilitates exchanges between the national and regional bodies that manage and administer funds from the European Regional Development Fund (ERDF) and the Cohesion Fund. It helps civil servants share knowledge, good practice and practical approaches with their peers in other EU countries.
2017

Also known as the Davos from the East, the 3 day event combines global economics and political topics with European practices. Guests and speakers from around the world are participating, bringing their added value through meetings and conferences. In the last three editions, representatives of the local authorities from the North-East Region of Romania were present in Krynica, both as speakers and as participants. All the delegations were organized by the North-East Regional Development Agency.
2018

EURADA summer course 2020 was an excellent learning experience to help professionals acquire knowledge, valuable contacts and skills to prepare high-quality project proposals for their regional development agencies (RDAs). The Brussels Office was involved from the beginning in this initiative.

ERRIN is a well-established Brussels-based platform of more than 125 regional stakeholder organisations from 22 European countries, most of whom are represented by its Brussels offices.

Became a Management Board Member (2018)

Became a part of the ICT Working Group leadership (2020)

Became a part of the Smart Specialisation Working Group leadership (2021)

We make international opportunities more accessible, opening up more possibilities for our partners.

If you are an investor, a researcher, a project promoter, an entrepreneur, a citizen or a representative of an entity with an interest in North East Region of Romania, we are here to help.

We open doors for you to businesses, local governments, universities, and to a wide diversity of local partners, offering you tailor made services to connect with our territory.

We are experienced in:

// Organizing economic and expert missions in our region;

// Matching you with an ideal project or business partner from our regional ecosystem;

// Organizing representation to industrial and trade fairs and economic forums;

// Identifying twinning and partnering opportunities for your organization;

The Digital Services Act protects consumers and their fundamental rights online, establishes a powerful transparency and a clear accountability framework for online platforms and fosters innovation, growth and competitiveness within the single market.

Check out also the new rules applicable to businesses.

A robust innovation ecosystem for the future of Europe (report)

This report presents the result of a consultation process launched by the Commission with representatives of innovation ecosystem stakeholders – startups, investors, corporates, universities and Research & Technology Organisations (RTOs), regions and cities, national innovation agencies and ministries. The goal of the collected information is to help build the future of the innovation ecosystem in Horizon Europe, the next funding programme for Research and Innovation, in the most inclusive, diverse, and connected way possible.

The purpose of this guide is to help all entrepreneurs, regardless of their skin colour, gender, age and social background to have better and non-discriminatory access to financing.

This report summarises evidence on the situation of the entrepreneurship ecosystem in Romania and provides a background for the PSF Specific Support to Romania’s panel of experts.

This publication presents a detailed analysis of the results of the stakeholder consultation. It includes revealing findings for example on the flexibility of the programme, on the simplification of rules, or the European added value. It also contains a set of key messages and areas of improvements as suggested by stakeholders.