Success stories, possible with the support of Regio Nord-Est 2014-2020 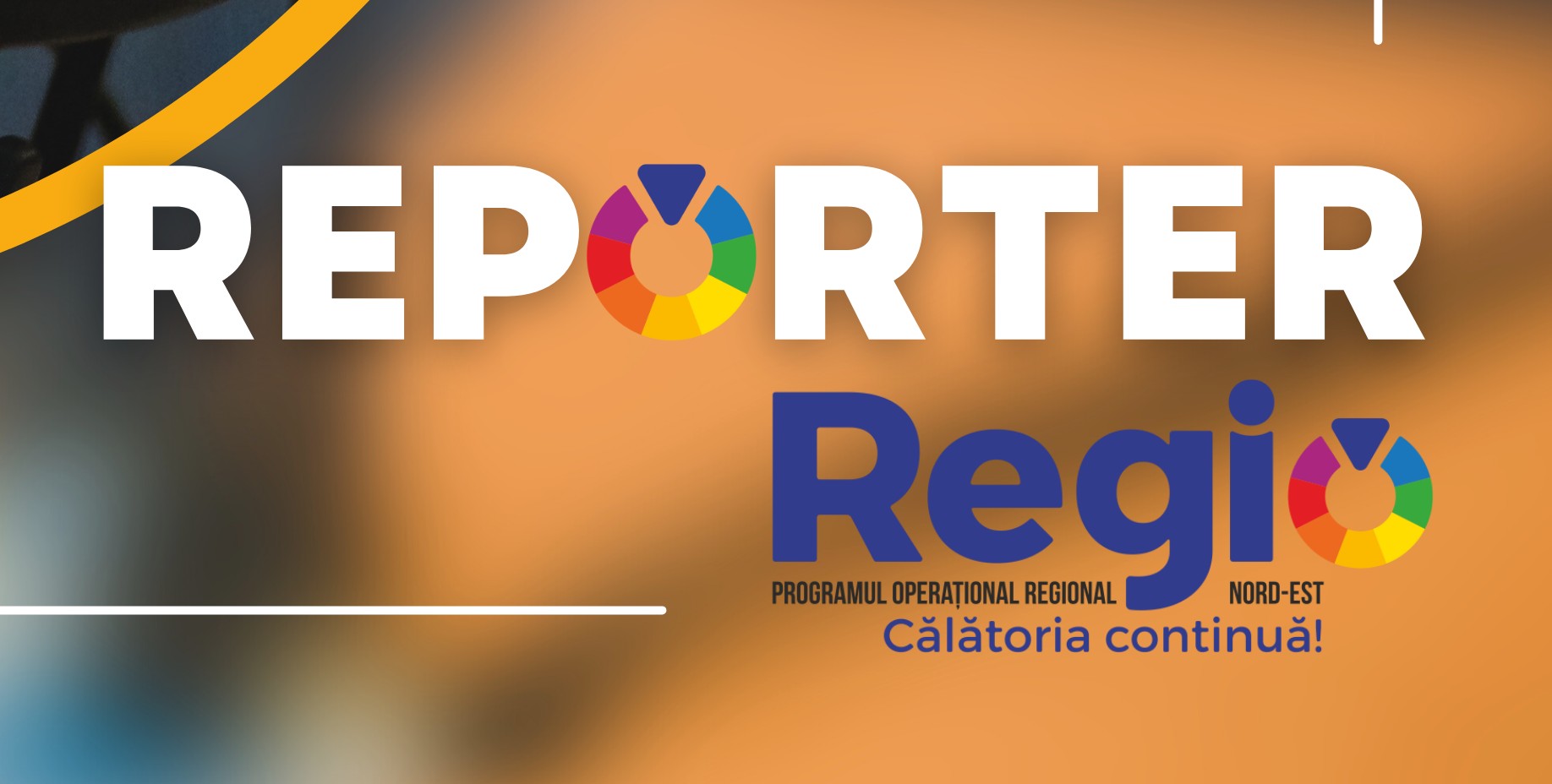 „I’m TraLaLa, I’m TraLaLa
I always listen to and sing music
And everything I do and when I do
Music is all around me! ”

If you have small kids, it’s impossible not to know these lyrics. Cici the Elephant or the Zigaloo song are also very well known not only among children but also among adults. The lyrics are catchy and you end up singing them without realizing it.

This month’s Reporter Regio episode brings up a couple from Iași, husband and wife, Alexandru and Cristina Badan, who managed to put Romania on the performance map in creating educational content for children on YouTube. The channels set up by the two spouses, under the umbrella of Mora TV SRL, with exclusive content for children, have millions of views. TraLaLa ranks first in national views, and the international channel LooLoo Kids is in the top 5 internationally. Three years ago, they received the „Diamond Button” offered by YouTube for a large number of subscribers, and now they are waiting for the „Ruby ​Button”. 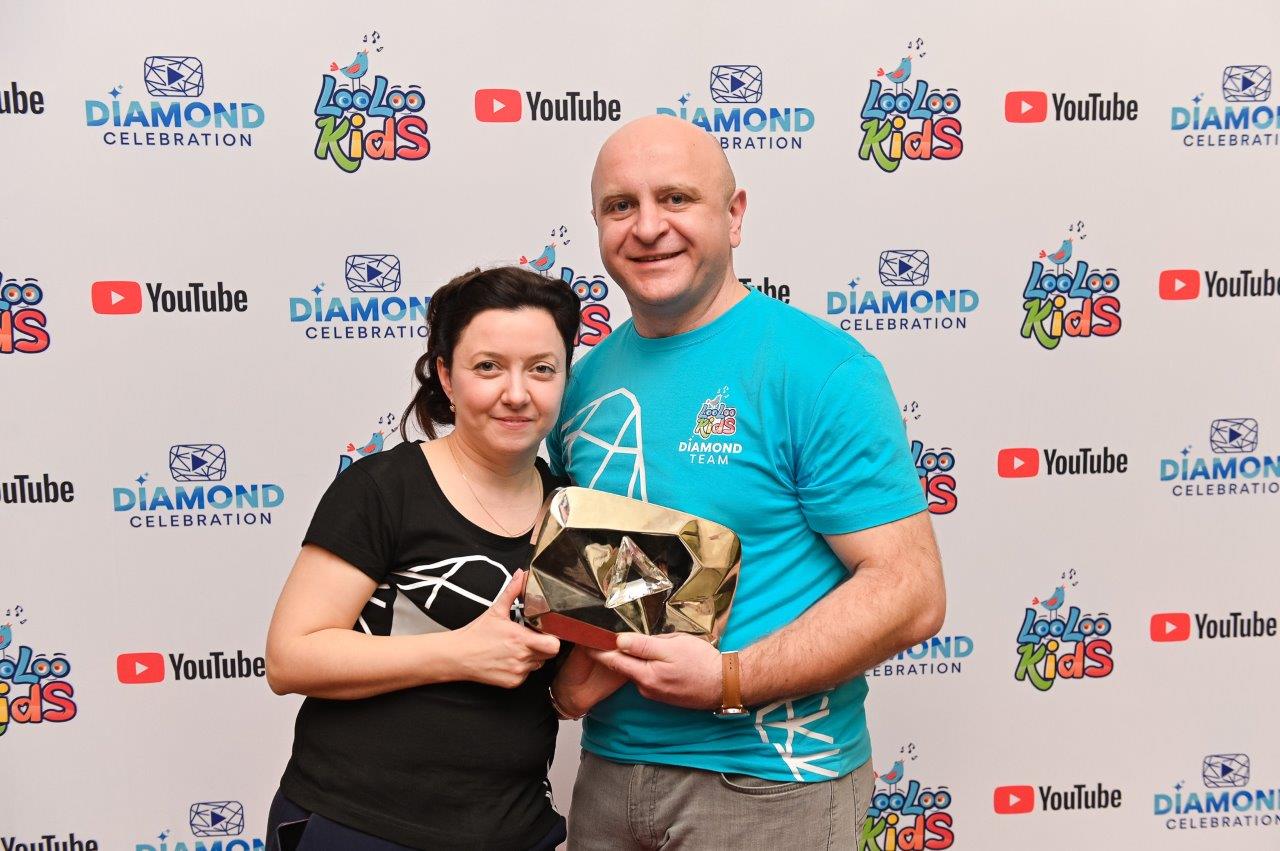 From engineering and dental technique to children's music animation 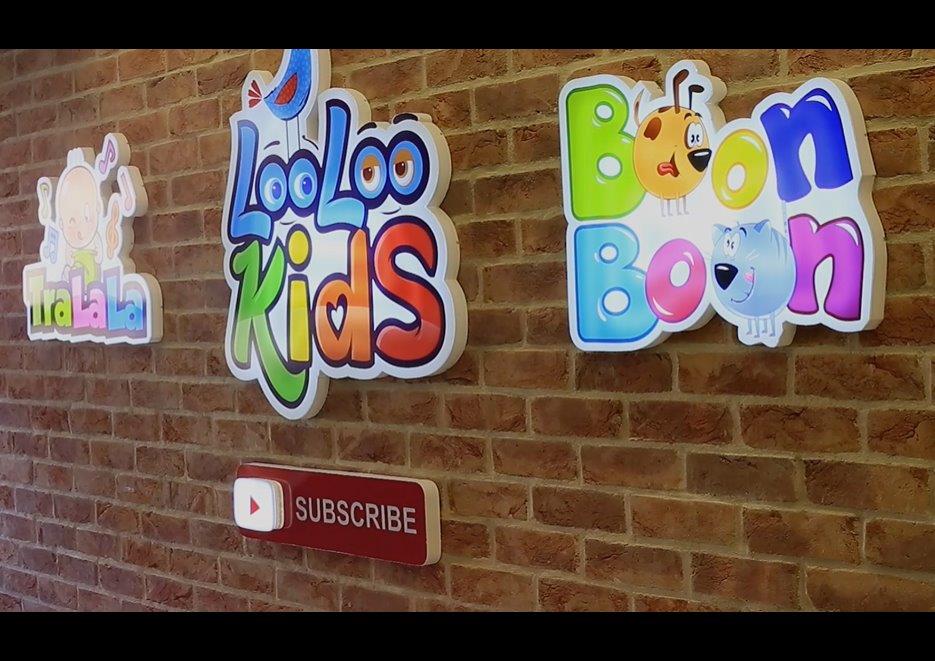 It all started in 2012, when Alex and Cristina, with two small children, wanted to find something suitable and educational on YouTube for their children, in Romania. Alexandru was a mechanical engineer, but he worked in sales, and Cristina was a dental technician, but she also had an online store for accessories and evening dresses. They had nothing to do with music, but they had an idea: to create songs accompanied by animation for their own children and all children in Romania. They opened a YouTube channel, TraLaLa, and uploaded the first animated song made with the help of collaborators. The feedback received from the parent community was extraordinary and they were always asked when the next episode came out. This encouraged them and gave them the confidence to do other episodes so that in the next two years, they reached 50 episodes. They worked in the evening after the children fell asleep. When they saw that these animations caught the audience so well, Cristina came up with the idea of ​​launching an international channel in English. That’s how „LooLoo Kids” was born.

For the international channel, which was in a visible expansion, the two spouses realized that the quality level had to be different, which meant money invested in high-performance equipment. „One of the production stages requires the rendering process, or that meant a very high computing power. From 2014 to 2018, the collaborators we worked with complained to us about the limited rendering capacity. For example, there were one or two episodes a month of 2 minutes each. When we requested certain changes, for 10 seconds of changed animation we had to wait 3-4 days due to the slow rendering process. And that slowed down the production process. Then we knew we need very high computing power so I decided to submit a project for European funds for this equipment. We already had a very large volume of data, with our online activity, and the equipment had two components: the rendering part (calculation) and the information storage part ”, says Alexandru Badan. The total value of the project was 245k euros, and the non-reimbursable financial assistance was 183k euros. 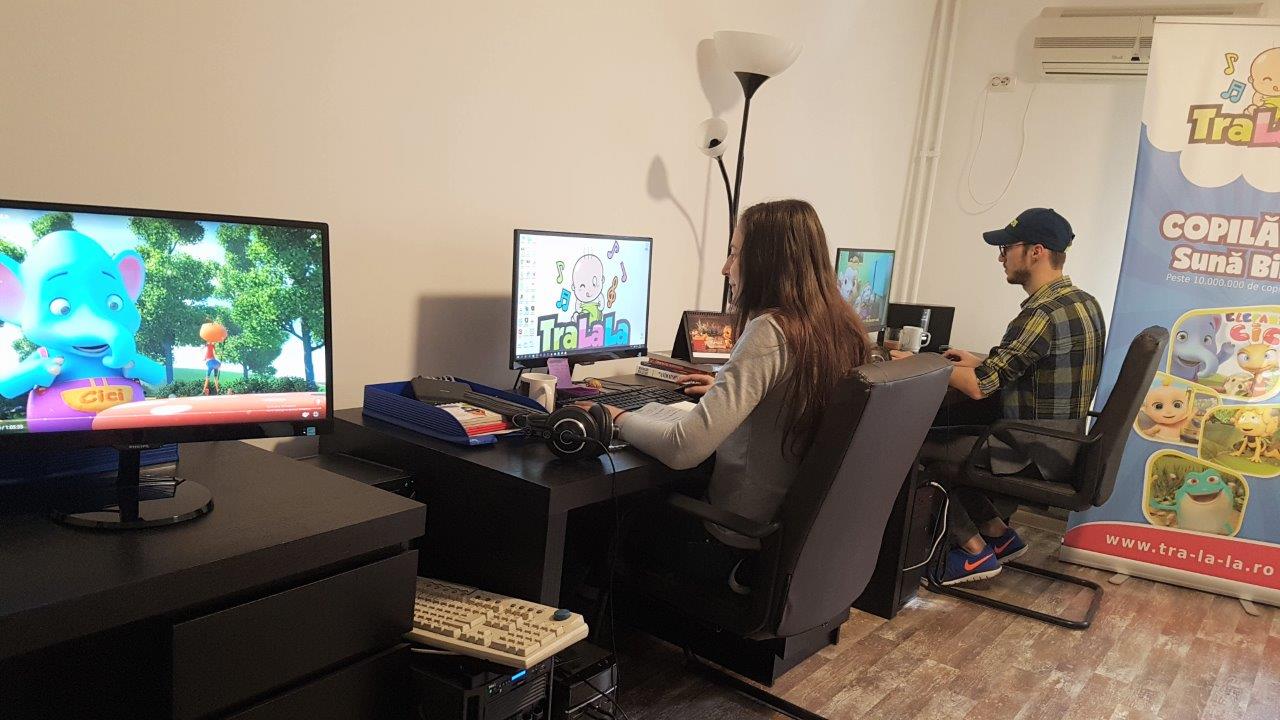 Since then, in addition to LooLoo Kids, they have opened channels in more than 10 international languages ​​and distributed content to other global platforms such as Netflix, mobile applications, and television. „We are in all places and on all platforms where there are children. And on planes. There are few places where children consume animation or songs where we are not, ”says Cristina proudly.

Vali Pintilescu, who has been with them since 2017 as development manager, says that they wanted to get to all those places where, usually, only the recognized international brands were present, Disney, Marvel, “brands that do not leave from countries like Romania and whose take-off is easier ”.

Alexandru, Cristina, and Vali have collaborators all over the world. They work with creative studios from Spain, and Canada and composers from the USA or Serbia, but the main idea starts in Iași City. It was very important for them to create a unitary note, for the collaborators to understand the concept, not to compromise, to have the same educational principles, from the first episode to the last, until a series closes. And that’s what Cristina does. She is a creative and critical eye at the same time. „No one has been able to develop the level of exigency and the power to constructively analyze each part like her. Because there are many partners, there are strong cultural differences. She knows exactly if a sequence is good or not for children, because first of all she is a mother, everything goes through the mother filter. For us men, everything is ok, but she immediately sees an animation in which the animated character holds a child in her arms in an unnatural way. She feels the emotion that needs to be conveyed. Cristina is the „enemy” of the animators because they often work up to 5 times the same sequence until it comes out well „, says Alexandru about his wife.

From Diamond to Ruby, 50 million subscribers

YouTube has a performance rating system that rewards you with buttons. For 100k subscribers it offers the silver button, for one million – the gold button, for 10 million subscribers – the diamond button, and the ruby ​​is offered for 50 million subscribers. 3 years ago Mora TV received the diamond button and it was the first button of its kind in Central and Eastern Europe. It was an event that marked not only their performance but also the commitment of YouTube to support content creators around the world, not just those in London, Los Angeles, or New York, who populate this area. Currently, through LooLoo Kids, Mora TV is in the top 5 content creators in ​​the kid’s area worldwide. „With the Looloo Kids project, we have almost 49 million subscribers. At 50 million it means we’ll get the ruby ​​button. Only 39 content creators worldwide in YouTube’s history have reached over 50 million subscribers. It’s a performance and we hope to celebrate as soon as possible. We estimate that it will come in the next 2-3 months and we hope to have an event at least as sumptuous as the diamond „, says Vali. 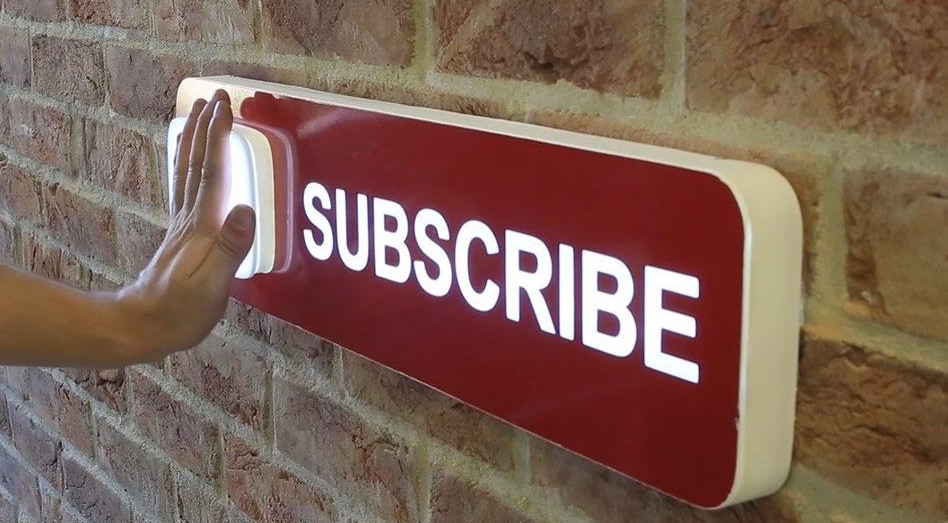 The general audience on all channels has reached 300 million families per month, which is an impressive number of views. Even if financially speaking, international channels are the most successful, this does not mean that TraLaLa is left behind. The couple says there are times when the whole team only works for TraLaLa because both Cristina and Alexandru are emotionally attached to it. And even if the impact is somewhere between 5-8% in business, they say that you can’t leave behind a project in which you put so much soul and they want to have the same quality as the international ones. 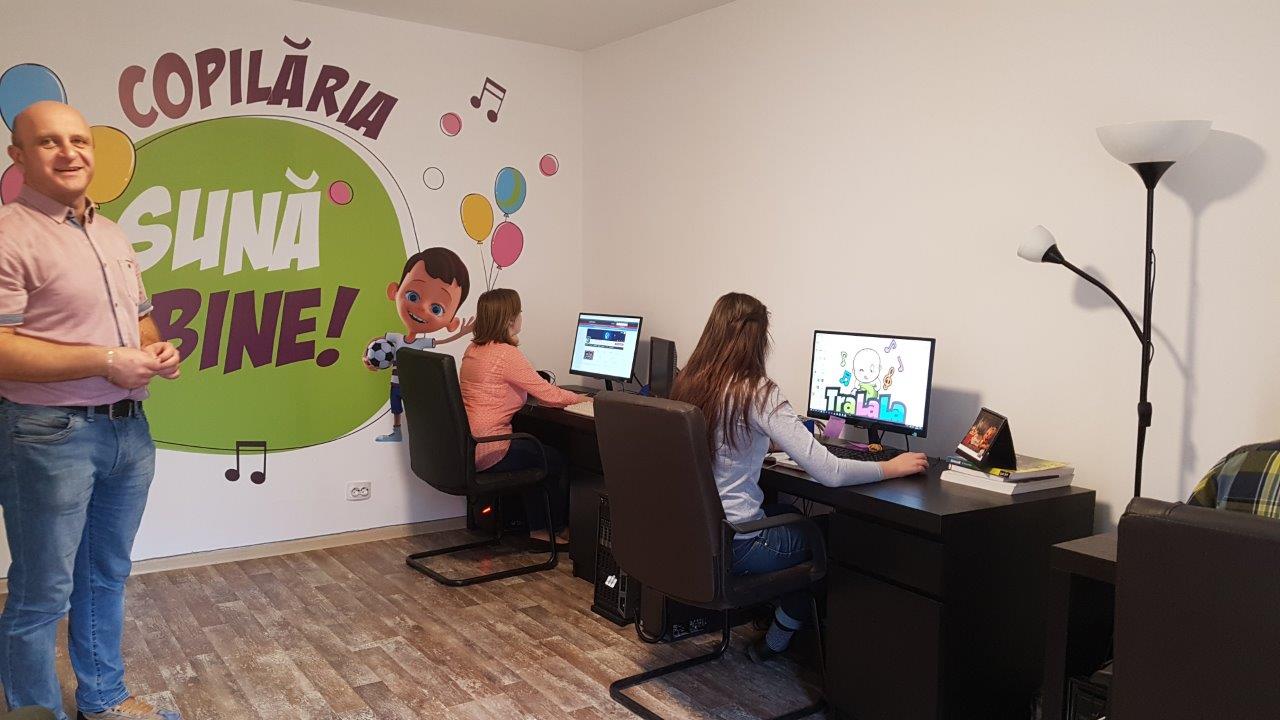 Cristina and Alexandru are 100% present in their business. Filter all stages, from ideas to feedback. But at the same time, they kept their simplicity and work side by side. Vali Pintilescu says about the two spouses, with admiration, that they are atypical entrepreneurs. „They are very involved in this work, more than hundreds of entrepreneurs I know. When you see that the business is on an upward trend, you let it grow. But they are still here, working every day and I think that could be the secret ingredient, the recipe for success „.

With a turnover of 796k euros, a profit of 265k euros, registered in 2020, and 12 employees, Mora TV entrepreneurs focus on international growth in the future, but not only. They want to increase the number of channels, develop the productions they have engaged in, such as the project related to classic stories in a 3D format similar to Disney, and bring to Romania successful productions for children. Recently, in November 2021, TraLaLa also became a television station. After obtaining a TV license in 2020, TraLaLa can now reach all children, not just those with internet access. They are constantly evolving and they say they want to have the time to put into practice all the plans and projects they have. At the same time, because they have many dreams of expansion, they are pursuing everything related to open calls for European funding. „We are constantly scanning everything that means information about European funds. We are up to date with them. In animation, where we invest enormously financially, we have a very long payback period. A full season for a project budget should exceed 800k euros. It is difficult to invest in a new project, given the payback period. That is why we need European funds „, says Vali Pintilescu.

The need for funding for intangible assets

The Mora TV entrepreneurs want the intellectual property to become eligible for European funding, given the specifics of their business. „We are atypical, exotic for the Romanian market. We need money for licenses, software creation, and ideas. And that is not funded. The state does not support this area at all. We have a lot of projects in mind that we would implement if we had financial support. The international market has taught us a lot about the level of demand. You are in a race with players who have behind them either some companies that have huge resources, or some responsible states that invest in promoting the actors in this area for children. But I am still optimistic and with every call, we see if we can finance intangible assets. It hasn’t appeared yet. We demand a more open vision related to the area of ​​funds for licenses, for intellectual property, I believe that the added value is not only given by technology, it is also given by activities in the area of ​​the creative industry. Because we have proven that the creative industries can bring added value, generate profit, jobs, and a product that can be exported to several markets „, concludes Alexandru Badan. 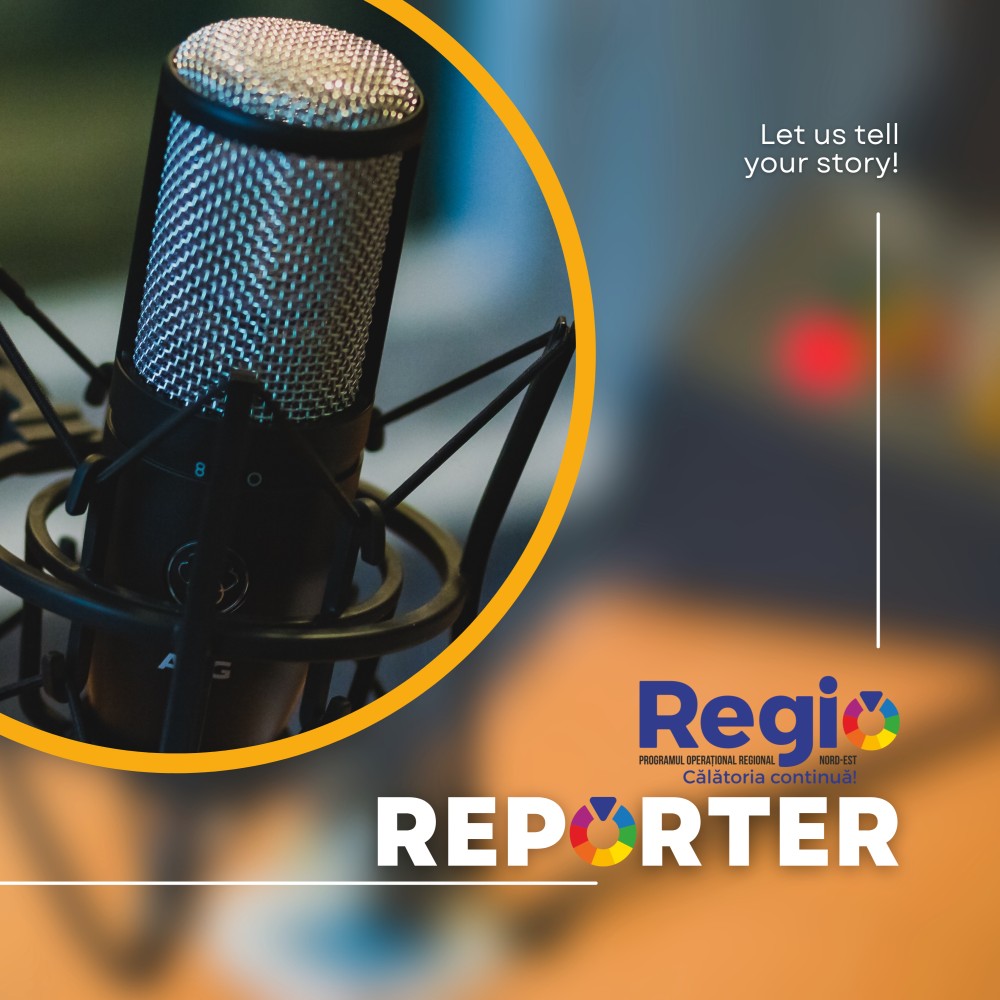 Reporter REGIO is a new North-East RDA initiative, which focuses on promoting the successful projects of our beneficiaries, projects that have managed to stand out by bringing added value and impact to the community. At a time when negative news predominates, we offer you beautiful but true stories for reading, meant to strengthen the belief that „it is possible”! Be part of the story!

Are you a Regio beneficiary? Let us tell you the story.

The Technical College Lațcu Vodă, a stepping stone for future craftsmen from North-East

Manifatture Neamț SRL – or how to knit success thread by thread